As we enter 2023, we look back and reflect on how fast 2022 went by. And the last quarter of the year was no exception. We held a wonderful Govardhana Puja celebration which attracted copious guests to New Vraja Dhama, not only from Hungary but also further afield. The weather was superb, even if a little cool, and His Holiness Sivarama Swami Maharaja was present to inspire the devotees to take shelter of Giriraja and pray to be given a place to reside near Him. The enthusiastic devotees prepared and brought an abundance of sweets for the pleasure of our Govardhana-lala. Thus the festival was replete with sweetness in all ways.

A few days later, we held our annual Diwali Dinner in a theatre in Budapest. In attendance were ISKCON Hungary’s outstanding supporters and friends, who were treated to an evening of dance, kirtana, presentations, and of course, sumptuous prasadam. Having missed two years due to COVID, this year we had an especially full house. Sivarama Swami Maharaja delivered a keynote speech during which he handed over the leadership of ISKCON Hungary to Radha Krishna Dasa, who expressed deep appreciation for Maharaja’s tenure of over three decades, and led the audience in a long and heartfelt round of applause.

Arguably the most outstanding of all the events of the past three months however was the amazing Srila Prabhupada book marathon. Hundreds of devotees around the country took to the streets and parking lots to offer the people the most valuable gift one could imagine; transcendental knowledge in the form of Srila Prabhupada’s books. And despite the country being steeped in an economic crisis, our devotees found that people were very much open to accepting the wisdom and offering donations. Thus, it was one of our most successful marathons ever in Hungary.

As usual, in this issue we would like to introduce you to one of our Nitya-seva donors. Bhakta Attila Palotai joined the congregation back in 1993 and was involved in the pioneering days of Krishna Valley. He was a book distributor for two years, and participated in building Radha-Syama’s temple too. Being around in those early days, he had many wonderful opportunities, such as being able to see Radha-Syama’s divine forms even before Their installation. He also recalls how he was able to place a donation at Their lotus feet personally. Atti, as he was called, has been a dedicated member and supporter of our community ever since. More recently, Srila Sivarama Maharaja changed his name to “Seva Atti” after repeatedly seeing his enthusiasm to perform all types of service, big and small.

Attila became a Nitya-seva donor in 2019 alongside his daughter, Palotai Krisna-lila. He has been very reliable in sending his monthly instalments, and recently completed his first Nitya-seva and begun a second. He told us that since he started contributing, Krishna has been reciprocating with him in so many ways: “As I give more and more, Krishna gives more and more in return,” he explained. Of course, as devotees, we do not look for material benefits while serving our beloved Lordships; they are but a by-product. The primary mercy that Attila speaks of is the feeling of being blessed by Radha-Syama and Gaura-Nitai in his spiritual life. As he puts it: “I feel like the Nitya-seva is keeping me here.” It is so inspiring to see how devotees surrender, and how the Lord responds.

As Srila Prabhupada said, for us every day is new year, because Krishna is ever fresh, ever new, and we are celebrating Him. Still, since most of the world runs according to the Gregorian calendar, we can take this as an opportunity to remind ourselves that we are one year closer to death and thus, we have to increase the urgency to achieve our goal of love for Radha-Syama. Thus, we must be more serious, sincere, and determined in our chanting, in our reading of Srila Prabhupada’s books, and in our respective services.

So on this occasion of welcoming in a new year, we would like to say thank you to you all for your contributions towards the service of Sri Sri Radha-Syamasundara and Sri Sri Dayal-Nitai Vijaya-Gauranga. And, with 88 days left on the calendar, we welcome anyone who would like to start a second, third, or fourth Nitya-seva, or bring new persons into Their Lordships’ service. We wish you all a very happy and Krishna conscious year ahead. 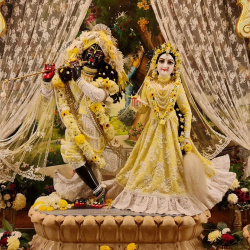