Summer is the busiest period of the year in New Vraja Dhama: not only are there a slew of festivals, but it is also a key time for agricultural works. One of the main goals of Krishna Valley is achieving increasing levels of self-sufficiency, so a focus for the local devotees during the summer months is producing food. Krishna says in Bhagavad-gita 3.14-15:

“All living bodies subsist on food grains, which are produced from rains. Rains are produced by performance of yajna [sacrifice], and yajna is born of prescribed duties. Regulated activities are prescribed in the Vedas, and the Vedas are directly manifested from the Supreme Personality of Godhead. Consequently, the all-pervading Transcendence is eternally situated in acts of sacrifice.”

Our modern godless society has strayed far from this God-given system. We live in an industrialised, urbanised world, and most have lost almost all contact with nature. In the cities, people buy food from supermarkets in exchange for paper, so they forget that it is actually a gift from God through the agency of Mother Earth. Peoples’ disharmony with the natural way of things reveals itself in various other ways; for example, we often hear that the weather is good if the sun is shining and bad when it rains. But “bad” rains give rise to good crop yields.

Despite the fact that we at Krishna Valley try to follow Krishna's above-mentioned instructions, and we are fortunate enough to perform the topmost of sacrifices by engaging in the sankirtana-yajna and serving Radha-Syama, we are still subject to collective karma. And because the majority of the population do not conform to these irrevocable laws, we also had to endure severe drought this Summer. Most of the wells dried out as well as the water in our Yamuna river. The grass dried up on the fields, the trees hardly bore fruit, and New Vraja Dhama began to look more and more like a desert. But devotees daily watered the vegetable gardens over the summer months so as to produce some nice vegetables for the Deities and the devotees, and the Lord showed His mercy on His appearance day: we had plenty of rain again, bringing the drought to an end.

Fortunately, our preaching was not hindered by the drought and the heat: we had thousands of guests at our annual Búcsú (Open Weekend) Festival, and the Krishna Valley retreats were also fully booked. Furthermore, with travel restrictions having abated, devotees have been visiting from far and wide to take darshan of the Divine Couple, particularly for the Janmastami and Radhastami festivals. Some were particularly notable: Niranjana Swami Maharaja, Bhakti Bringa Govinda Swami Maharaja and his wonderful kirtana-party, Adikarta Dasa Adhikari and Yadubara Dasa Adhikari.

In addition to the exuberant kirtanas and inspiring classes, we witnessed an exceptional sight during the Radhastami festival: the first pushpa-abhiseka for big Radha-Syama. This enchanting, transcendental event took place right after mangala-arati, under the guidance of Sivarama Swami Maharaja. The petals of 5000 roses, of varying colours, were showered over Radha-Syama, eventually covering Them up to Their waists. It was an indescribable and unforgettable experience, leaving many in tears. Srila Sivarama Maharaja promised we would have the same next Radhastami, but with double the number of roses, to cover Them to Their necks! 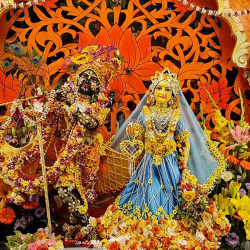 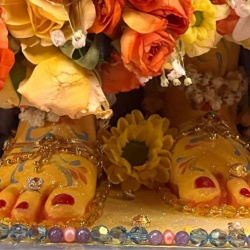 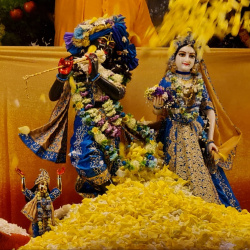 As usual, we would like to conclude this newsletter with the story of one of our Nitya-seva donors. Zsolt visited Krishna Valley for the first time last summer: he attended a 3-day retreat. He runs a construction company, so life is intense and exhausting. He found it refreshing to distance himself from his everyday duties and be absorbed in the otherworldly atmosphere of Krishna Valley. He was touched by the sweetness of the dhama, the beauty of Radha-Syama, and the kindness of the devotees. He made friends with a few devotees and even had a brief encounter with Sivarama Swami Maharaja. Zsolt began meeting regularly with his newfound devotee friends, chanting daily, studying Srila Prabhupada's books, and even participated in a 6km swim in Lake Balaton with a group led by Sivarama Swami.

In the meantime, Zsolt met Petra, who didn't know Krishna consciousness before, but soon became even more dedicated than he. So they are now helping and encouraging one another on the path of devotional service. Being an accountant, Petra helps the Movement by bringing her clients' attention to the opportunity to offer 1% of their taxes to a religious organisation, and encourages them to offer that donation to us. Zsolt and Petra are grateful for the significant changes in their lives and they are showing that gratitude by offering a Nitya-seva donation for the pleasure of Sri Sri Radha-Syama and Gaura-Nitai. No doubt Their Lordships will shower Their blessings on the couple to grow from strength to strength. 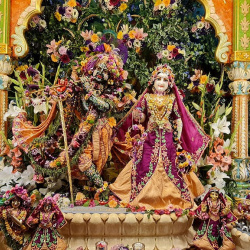