This year’s Govardhana Puja festival was much anticipated, especially so since last year’s festival was cancelled due to the coronavirus pandemic. So devotees were eager to make a special effort to please Sri Govardhana Lal with their offerings and participate in the festival in person. Unfortunately, COVID ruined the plans again; increasing virus cases and new national restrictions forced our yatra leadership to close the festival to visiting devotees, who were asked to follow online instead.

After a rapturous morning kirtana led by Dhirasanta das Goswami, Sivarama Swami gave class on the Govardhana Puja pastime and the importance of protecting Krishna’s cows. Then Govardhana Lal enjoyed an abhiseka followed by a trip to the goshala to feed the nicely painted and decorated cows and oxen. The parikrama path around Govardhana Hill had just been completed, so after the goshala visit, Govardhana Lal circumambulated Giriraja. And the culmination of the festivities was the mountain of sweets offered in the temple room for the satisfaction of Govardhana Lal. Of course those devotees who were unable to attend in person and present their gifts of sweetmeats offered their own individual expressions of love to a picture of Govardhana Lal at home. 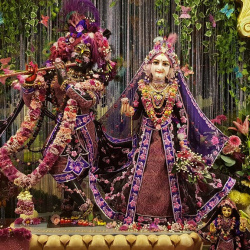 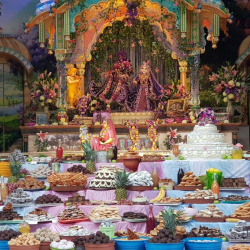 Govardhana Puja is the prime amongst many festivals falling during the month of Kartika, and all were celebrated with enthusiasm in New Vraja Dhama. There were also daily afternoon parikramas to various holy places. And the cherry on top was the last night of Kartika, when under a full moon, after Radha-Syama’s curtains closed for the night, Sivarama Swami Maharaja led a huge Harinama throughout the streets of New Vraja Dhama. It was a blissful evening for all involved and a fitting way to end a month of festivities.

Days after Govardhana Puja, many devotees departed from Krishna Valley for travelling sankirtana, since it is customary that local devotees, who have various services throughout the year, leave early and have a two-week warm-up before the official start of the Prabhupada marathon. And the devotees they leave behind go on their own marathon at home, covering the remaining services.

The marathon time is always magical in so many ways. The pujaris switched on the mobile phone of Govardhana Lal, the Sankirtana Commander of Hungary, where He anticipated the devotees’ text messages asking for His blessings. And Lord Jagannatha, not having had an opportunity to parade His city this summer, boarded His ratha cart (car) and visited sankirtana devotees in the parking lots and streets throughout Hungary to support and inspire them. This year 199 members of the Hungarian yatra participated in the marathon and distributed 36,777 books for the pleasure of Srila Prabhupada, Gaura-Nitai and Radha-Syama.

In addition to all this, Krishna Valley is continuously being developed and beautified; as mentioned, the parikrama path around Govardhana Hill was recently completed, the two big lakes beside the Yamuna are being cleaned, new reservoirs of water are being built around the dhama, and a few areas in the temple building are being rebuilt, such as the expansion of Radha-Syama’s outfit room. Furthermore, the pujaris are working away on designs for Radha-Syama’s new outfits for 2023, which will be embroidered in India by Their Lordships’ very own embroidery team. They are designing beautiful new crowns and jewellery too! But let all these updates, and more, be a surprise to you when you visit New Vraja Dhama, soon! 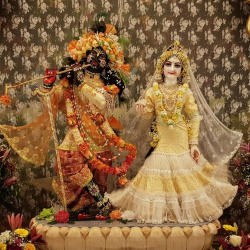 In this issue of our newsletter, we would like to tell you about a very kind devotee couple, Bhaktin Együd Marianna and Pariksit Das. Pariksit served as a brahmacari for 5 years in the Budapest Temple in the early 2000s; he was exemplary in many ways, being very successful in book distribution and having solid sadhana, alongside completing a degree in Theology at our ISKCON Bhaktivedanta College. And he was loved by the devotees because of his mild, kind and loving personality. After his brahmacari training he moved out of the temple and began working, meeting with similar success in civil life as was the case in temple life. He later met Marianna, also a dedicated devotee, and the two married and are practicing Krishna consciousness strictly at home. However, due to busy lives, they were not able to visit the temple very often.

A few years ago, they missed the Govardhana Puja festival, so one of the devotees visited them to drop off some maha prasadam. Since they were out, he hung a package of maha on their door handle. That evening, Pariksit Prabhu phoned the devotee saying his timing was inspired; they had just returned from the doctor after he had been diagnosed with a brain tumour. So this surprise at their doorstep was particularly poignant. They were very touched by the personal attention of the devotees, and the Lord, so they wanted to reciprocate by choosing a day to sponsor Radha-Syama’s worship in perpetuity; the Nitya-seva program.

By Their Lordships’ mercy, Pariksit Prabhu’s brain tumour was successfully removed, he regained his health, and the couple can now again focus on their spiritual lives. We would like to thank them for their selfless service, good example and their friendship. And we would like to say thank you to all of you for your continued and devoted support towards the daily worship of Sri Sri Radha-Syamasundara and Sri Sri Dayal-Nitai Vijaya-Gauranga.