The Summer months are always full of life in Krishna Valley, as well as the Hungarian Yatra more generally, with one festival or preaching program after another keeping the diary full. Fortunately, the pandemic was in check during this period and with many Covid-related restrictions lifted in Hungary, people were in full motion. Thus, many visitors came to New Vraja Dhama, devotees did weekly Harinamas both in Budapest and the surrounding area of Krishna Valley, and the annual Pada-yatra also went ahead this year.

August in Krishna Valley was particularly action-packed, with Balarama Jayanti, Janmastami and Srila Prabhupada’s Vyasa Puja all falling during this auspicious month. For the pleasure of Lord Balarama, the devotees accompanied the Lord to one of His pastime places, Rama-kunda, where they cooked preparations for Him on brick stoves, chanted bhajanas and heard katha about His glories.

Janmastami being on a Monday this year, the weekend before it saw a two-day nama-hatta camp, which was a chance for devotees from around the country to come together and chant and dance, participate in a cooking competition, and a talk on varnasrama. Furthermore, Covid restrictions dashed the chances of a Ratha-yatra in Budapest for the second year running. Not to be restricted any further though, Lord Jagannatha, Baladeva and Subhadra Devi surveyed the streets of New Vraja Dhama in a wonderful in-house Ratha-yatra procession that enlivened one and all.

This year’s Janmastami festival marked the 25th anniversary of the installation of Sri Sri Radha-Syamasundara. In the week leading up to this great occasion, Radha-Syama were being painted, so darsana was closed, and devotees had to settle for small Radha-Syama. As darsana time closed in on Janmastami day, everyone was in deep anticipation, particularly to see Syamasundara’s new tilaka. Of course, it was well worth the wait, as Radha-Syama looked exquisitely beautiful in Their new, colourful outfit. 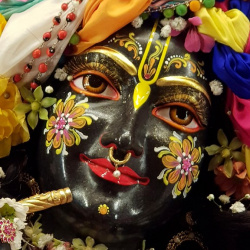 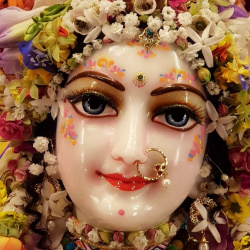 The whole day was about Radha-Syama: in the morning, Srila Sivarama Swami Maharaja gave a wonderful class on the glories of Radha-Syama and our duty to serve Them with our lives and souls. Then, local senior devotees reminisced about the mammoth efforts to build the temple, and the installation of Their Lordships. Heading into the evening, the devotees went on a parikrama with small Radha-Syama to Janmasthan, and to the Yamuna where Radha-Syama engaged in Their boating pastimes on Their new, swan-shaped boat.

But these two parts of the day sandwiched a very significant, historical event; the first sannyasa-initiation in the history of the Hungarian Yatra, during which two senior brahmacaris accepted the renounced order of life. Thus, we welcomed two new swamis into our community: His Holiness Mahaprabhu Swami and His Holiness Bhaktipada Goswami. It was a very special experience to see two devotees with whom many have served together over the past quarter of a century, or more, to take this great step. Surely they will get special empowerment from Radha-Syama to continue from strength to strength, and bring many souls closer to Their lotus feet through their preaching.

On Janmastami evening, we continued the celebrations with fireworks, an abhiseka, a video from disciples of Srila Prabhupada sharing their experiences in the realm of Radha-Syama, and finally ecstatic kirtana accompanying the midnight arati. Without doubt, it was a day to remember for all. The next day was Srila Prabhupada’s Vyasa Puja, which was thought-provoking and soul stirring, as Srila Sivarama Swami Maharaja reminded us of our responsibilities to continue on Srila Prabhupada’s mission and make sure our contributions, individual and collective, are in line with the instructions of His Divine Grace.

The next festival, Radhastami, was two weeks after Janmastami. Radha-Syama received their 4th and 5th new dresses of the month in the morning and evening, with astounding efforts from various devotees from the pujari department. The day was packed with an inspiring class on the glories of Srimati Radharani, a swing festival for Their Lordships, an abhiseka, and a rip-roaring kirtana lead by the new sannyasis. As time goes on, and things increasingly open up, more and more devotees from abroad have been attending these festivities. All in all, the hearts and minds of many hundreds of devotees are coming together to serve Sri Sri Radha-Syama with love, dedication and sacrifice. 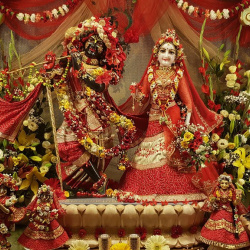 And that includes many of you! We received numerous donations towards Nitya-seva on Radha-Syama’s 25th birthday, and in this newsletter we would like to tell you about a kind couple who did the same.

Nama-Rupini Devi Dasi and Candragupta Dasa currently live in Spain, although they are senior, committed members of the Hungarian Yatra. Nama Rupini joined the movement when she was only sixteen, after being recommended to read the Bhagavad-gita by a friend. When she went to her local temple in the southern town of Pécs, she met with friendly devotees who engaged her in service; from there she became a regular and started to distribute books and prasadam.

Candragupta Dasa lived in a small town called Csurgó, near the Croatian border. He found a copy of The Teachings of Lord Caitanya on a bookshelf at a friend’s home, which he read. This inspired him to enroll at the Vaisnava Theology Department of Bhaktivedanta College in Budapest. During his first year at College, he began to practice Krishna consciousness seriously and decided to join the Budapest Temple. He lived there for 9 years as a brahmacari and became one of the most successful book distributors in the country. With his kind, gentle nature, inspiring classes and enlivening kirtanas, he endeared himself to the devotees. He then entered the grihasta asrama, founded a company, and in a short time achieved similar successes in business as he had previously in book distribution.

From the very beginning, Candragupta was very much attracted to Deity worship and regularly dressed Their Lordships, both in Budapest as well as in Krishna Valley. Although these two dear devotees are now physically far from Radha-Syama and Gaura-Nitai, distance is no barrier for the heart; like many of you, they have been continuously nurturing a desire to serve Their Lordships. This year, on the day of Janmastami, they committed themselves to sponsoring a Nitya-seva day, in installments. We are very grateful to them and to all of you who continue to support the worship of Sri Sri Radha-Syamasundara and Sri Sri Dayal-Nitai Vijaya-Gauranga.