August is normally the time of year when families take their vacations and go travelling. With many avoiding foreign travel however, Hungarian tourists came in droves to visit Krishna Valley. So the COVID-induced quiet of the previous months gave way to a bustling August, as the previously empty roads of New Vraja Dhama filled up with strolling visitors, as they made their way on foot up to the temple area and back.

August was also a month of celebration, with three of our annual festivals falling on this one month; Balarama’s appearance day, Janmastami, and Radhastami. Balarama Jayanti has always been a small, in-house festival, and this year was no exception. However, there was a great change at this year’s Janmastami festival, and even more so at Radhastami. The Janmastami celebrations were moved to the large tent outside the temple building, with everything taking place online, including darsana of the deities broadcast on a large screen. Furthermore, Radhastami, which is usually one of our largest gatherings of the year, was restricted to an in-house affair, as we saw a sudden rise in COVID cases in the country. But despite their online nature, both festivals were not short of ecstasy. In particular, a two-part seminar on Srimati Radharani by Srila Sivarama Swami on the Radhastami celebration day, that lasted a total of almost eight hours, made the festival this year unique in its own way.

Times have changed without a doubt, and Krishna Valley is in no way immune. So although we are eagerly awaiting the end of this devastating pandemic, we are accepting the situation as Krishna’s will and trying to learn to adjust to the many changes. 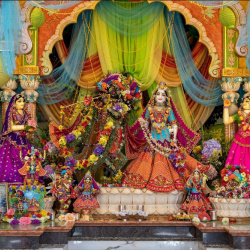 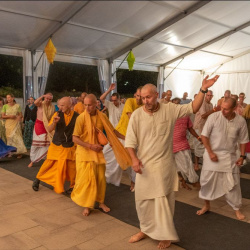 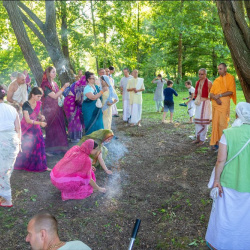 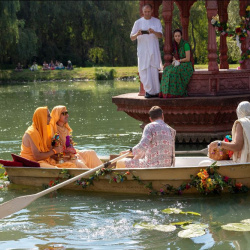 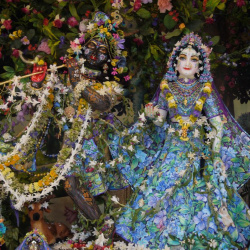 This month’s story is all about joint effort and determination in serving the Lord. About two years ago, the Nitya-seva team held a program in Hungary’s second but rather poor city, Debrecen. The lively and dedicated congregation members were happy to meet the team, but due to their limited means, expressed little hope of helping with the Nitya-seva program.

However, recently, and to our great surprise, we were approached by the Debrecen devotees with a sum of laxmi they had been jointly collecting over the past couple of years. Individually they do not have the means, but one of the enthusiastic members of the congregation there rallied everyone together to collect for a Nitya-seva as a group. So the Debrecen devotees have already amassed a very respectable sum, and they expect to complete an entire Nitya-seva in the not-too-distant future. Their determination and creativity in serving the Lord, and their love for Radha-Syama, has been truly heart warming to see.

For us, it is extremely inspiring to see how even in these difficult times, devotees are continuing to donate. During this past month we had many enquiries about the Nitya-seva program, as well as many new donors who have committed themselves to the program. We sincerely thank you all for your continued support.