Many of you know the story of how Jaya and Vijaya, the two transcendental gatekeepers of Lord Visnu’s abode, were cursed by the four Kumaras to take birth on earth as demons. Subsequently, they play an important role in the Lord’s earthly pastimes, allowing Him to experience a good fight! In June, Jaya and Vijaya finally graced us by coming to personally protect the entrance of Radha-Syama’s temple. Revati Ramana Prabhu from ISKCON Tirupati, inspired by New Vraja Dhama during his various visits, decided to donate these two beautiful deities to the temple. Wanting to serve Radha-Syama, Srila Prabhupada, Srila Sivarama Swami, and the devotees of New Vraja Dhama, he contacted his daughters and their husbands, who agreed to take up the service of getting the deities to Hungary. Revati Ramana Prabhu explains the importance and qualities of the deities: “The main activity of the Jaya and Vijaya deities is to protect the energy of the temple and also to remind those entering that this is the abode of the Lord. The suci-mudra projected by one of the hands of Jaya and Vijaya directs one towards the Lord, and indicates: ‘go and pray to the Lord with devotion and He will remove your sins and problems.’ While the tarjani-mudra indicates the devotees should be careful and not commit any mistakes whilst entering the Lord’s adobe.“

The deities first arrived from India back in January, however, the devotees were not able to install them immediately. Before his departure to India, Sivarama Swami had a three-hour meeting with the devotees in charge of the temple facilities and pujari department, trying to decide how and where the deities should be installed. Due to COVID-19 and the voluntary lockdown, their installation was delayed even further. In the middle of June, Jaya and Vijaya were finally placed in the entrance of the temple and installed in an intimate ceremony observed mostly by local devotees. We are extremely happy to have them with us and grateful to Revati Ramana Prabhu for his kind donation. 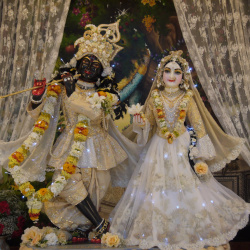 In this month’s newsletter, we would like to share with you the story of Samu, one of our Nitya-seva donors. Samu, a family man with four children and a career in marketing, first met the devotees three years ago on the streets of Budapest. Approached by a book distributor from the Budapest Temple, he purchased the Bhagavad-gita. With his family away for the Christmas holidays, Samu had an opportunity for reading through Srila Prabhupada’s purports. He quickly realised one of the book’s main instructions: the importance of chanting the holy name. Even though he did not have a set of beads, nor particular knowledge on how to chant, he decided to start chanting. A while later, after purchasing some beads and making friendship with the devotees at the Budapest Temple, he finally got the opportunity to attend one of Sivarama Swami’s Vlog programs and ask many questions. At that time, Maharaja gave him an instruction that he said he will never forget: “our only goal is that at the end of this life we will go back to Krishna.” After that encounter, Samu started considering Maharaja as his spiritual master. He also began to realise the far-reaching nature of the instruction and how it affects all aspects of his life; therefore he started to donate towards the Nitya-seva.