Being a self-sufficient farm community has always been one of New Vraja Dhama’s main aims; to show the world, not just in words, but also by practical example, an alternative way of living, just as Srila Prabhupada always wanted. Much has been done over the past (almost) 30 years, and we have gone perhaps further than many others have gone before. Yet much remains still to be done.

So this unexpected emergency situation that we all find ourselves in came and created a ‘fertile ground’ in which to cultivate the creepers of the next steps towards self-sufficiency. After entering voluntary quarantine, we naturally took stock and focussed our attention on developing “simple living, high thinking.” Thus, devotees who were normally engaged in outreach projects found themselves involved in initiatives related to self-sufficiency. More devotees were allocated to the agricultural department and others were given the task of replacing as many store-bought products as possible with our own self-manufactured products. For example, for years we have been producing our own flour, and now we have started making our own pasta as well. Furthermore, used office paper is now being recycled and transformed into paper products such as paper bags, boxes, trays and even fresh new paper. We have an abundance of ideas that have been floating around for aeons in the heads of many devotees, but are now beginning to come to fruition.

Devotees have also used this time to go deeper into their spiritual practices. We have arranged extra regular spiritual programs and devotees are increasingly taking some time to reflect, read, and intensify their Krsna consciousness. So in many ways it has been an inspiring period, and hopefully heralds the path leading towards complete self-sustainability. We hope that when the New Vraja Dhama doors open up once again for visitors, many of you will come and be a part of this enlivening transformation. 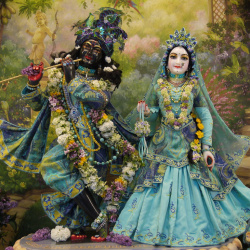 But it is not just us who have been “shaken up” by these unprecedented times; many of our donors have also made life-changing decisions. One of our Hungarian Nitya-seva donors who still had over half the required amount outstanding, recently made the bold decision to pay the full amount in one go, despite, like many, undergoing significant financial challenges. When we sent him an e-mail of appreciation, his humble reply was touching. He explained that although he does not earn very much and his financial situation is precarious, he felt he was simply returning Krsna’s money that came to him from selling a family property. He in fact gave the entire sum that he received from the property sale, but he sincerely did not see it as his own but rather the property of Radha-Syama. So he wanted to seize the opportunity to assist Srila Sivarama Swami in his service to Their Lordships.

On top of this inspiring story, we also received four new Nitya-seva pledges on Aksaya Tritiya, an auspicious day for making vows and new beginnings. We want to wholeheartedly thank all of our donors for their continued support even during these hard times. It is stories such as these that help us keep going, and give us all inspiration.