August is the harbinger of hot weather, a daily overflow of visitors, ongoing agricultural operations and abundant volunteers. August also brings with it several wonderful festivals. Halfway through the month we celebrated Balarama’s appearance day with our local devotees and a few outside visitors.  The celebration was sweet and intimate, like a family gathering. Lord Balarama made His appearance during the morning kirtan and remained with us for the rest of the day. Followed by chanting devotees, He was lovingly carried to one of Krishna Valley’s holy places, Rama-kunda, where the rest of the day’s activities took place. As energetic cooking took place in the especially constructed outdoor kitchen composed of wood fire pits, devotees simultaneously took turns attending a discourse, viewing a drama and chanting in kirtan. So many delicious preparations were prepared for the pleasure of Lord Balarama during this ecstatic marathon and everyone who participated felt the bliss of serving the Lord on His appearance day.

One week later we had still another chance to celebrate. This time is was Lord Balarama’s younger brother, Lord Krishna’s appearance day, known as Janmastami.  It was also Srila Prabhupada’s appearance celebration, known as Vyasa Puja. This year we were extremely fortunate to have the association of both His Holiness Sivarama Swami and His Holiness Devamrta Swami. The celebration lasted for two days. The many guests who joined us were able to attend a variety of kirtans and lectures as well as participate in other enlivening activities.

Devamrita Swami, in his Janmastami class, was talking about Kamsa’s death at Krishna’s hands. Kamsa’s intense meditation on Krishna was not born of love but of fear. Kamsa was afraid Sri Krishna was going to kill him. He was always absorbed in thought of Krishna due to this fear. Kamsa’s was fixed on trying to enjoy the material nature through his own endeavors This consciousness is often reflected in the minds and hearts of the average man. Minimizing the supremacy of Krishna and relying on personal strengths and abilities, everyone is trying to extract as much enjoyment from the material world as possible and they are always afraid death will come to end their enjoyment. Maharaja explained how Krishna, on the other hand, wants us all to come back to Him. We can go to Krishna as His loving servant and experience the highest enjoyment in that spiritual relationship or we can meet Sri Krishna as death, as Kamsa did.

The next day Devamrita Swami gave an inspiring talk about how Srila Prabhupada demanded the impossible from his disciples. He told the story of how Srila Prabhupada pushed the devotees to publish the entire set of Caitanya Caritamrta, 17 volumes, in only 2 months. He reminisced about how all those who participated in the book marathon were blessed with reciprocation from Srila Prabhupada and Krishna that was beyond anything imaginable within this world.  Maharaja encouraged us to keep this spirit alive into the future and urged us to continue attempting to do the impossible in the service of Guru and Krishna. 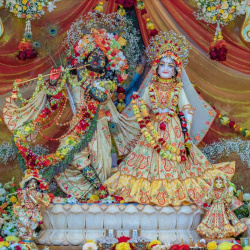 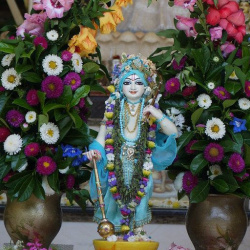 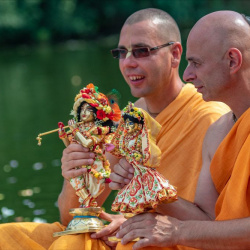 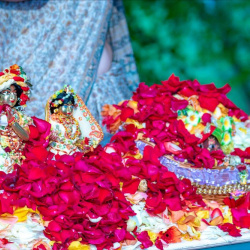 There was another noteworthy event this month. One Vaishnavi, who had been in the movement for at least 25 years, came to visit Sri Sri Radha-Syama during Lord Balarama’s appearance day. She was very inspired by Sivarama Maharaja, and, although she was not his initiated disciple, over the years she had maintained a close relationship. During the morning kirtan the day after Balarama’s appearance day, some devotees noticed that during the kirtan, instead of dancing, she was simply standing fixed in front of Sri Sri Radha-Syama’s altar crying!  That morning she saw the Nitya-seva introductory video. This presentation was her introduction to the Nitya-seva program. Later, one devotee asked why she appeared to be crying at Radha-Syama’s altar. She explained that up until that morning she had not felt much connection with Radha-Syama. She had always been especially attracted to Krishna-Balarama. On that day it was different.  During the kirtan she could feel a special mercy flowing through her. She could hear Radha-Syama asking her to serve Them and felt that They desired to have a more personal relationship with Her. It was so overwhelming that she simply could not stop crying. And now, she explained, “I am being asked to serve Them, so how can I refuse?” Having directly experienced how loving and personal Radha-Syama could be, she was pleased to become a Nitya-seva donor and encourage her parents to do the same. 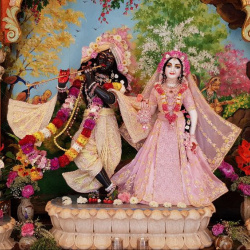