May is famous in Krishna Valley because in this month we celebrate both Narasimha Caturdasi and H.H Sivarama Swami’s Vyasa puja. This year was Sivarama Swami’s 70th birthday and so the festivities were especially exciting. With over 750 guests from around the world, including special guests such as B.B Govinda Swami, Niranjana Swami, Adikarta Prabhu, Rucira Devi Dasi and Madhava Prabhu, the three-day event was packed with nectar.

One of the most memorable parts of the program was when the senior devotees sat together while Sivarama Swami delivered his Vyasa Puja address. Afterwards it was their turn to share some thoughts about Maharaja and tears could be seen in everyone’s eyes as they narrated the uniqueness of Vaisnava association and in particular their individual loving exchanges with Maharaja over the years. 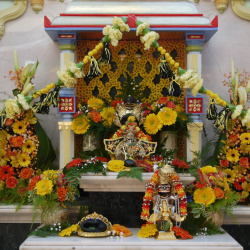 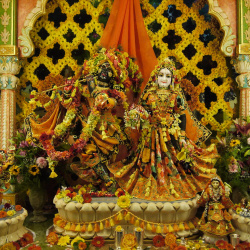 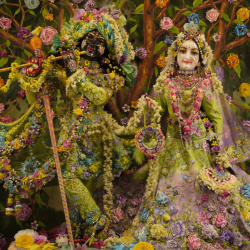 As Maharaja advances in years, we are forced to recognize that time is running short and, knowing this, treasure every moment’s association with him. Perhaps for this reason, some devotees felt the need to offer special gifts this year. One family from the UK decided to grant each child from the Krishna-Valley’s Gurukula and kindergarten, approximately 60 children, a complete set of the Hungarian Nava Vraja Mahima. In a special event with children, parents and teachers, Maharaja presented signed books to every child.  Maharaja delivered a short speech in which he requested the children to read the whole set at least twice. Maharaja explained that his main aim in writing these books was to present devotees the unique, spiritual qualities of Krishna-Valley and thus encourage them to dedicate their lives to serving here. Since that was Maharaja’s wish for Krishna-Valley's children, he was extremely pleased to present each of them with this priceless gift.

This month is also a time when the agricultural season becomes more and more intense. To get the necessary work done we need all the help that we can get. Fortunately, we received the assistance of four volunteers who came to help in our vegetable garden and goshala. They did not know that they would receive much more while helping at Krishna-Valley. It was enlivening to see Lewis from the UK, Gustav from Germany and Balázs and Dóra from Hungary occasionally participating in our morning programs. All of them showed interest in learning about our philosophy and by the time they left they all spoke about the wonderful experiences they had during their stay. In fact, not only did they make sure to remain with us during the Vyasa Puja celebrations, they actively participated in some of the events.  They expressed how mesmerised they were by the unique spiritual experience of the event. All of them said they are planning to visit again. This demonstrated that Krishna-Valley is more than a farm community where one can serve the Lord and live in nature, off the grid.  It is also an exceptionally effective preaching tool which will draw many people closer to Krishna consciousness.

Our Nitya Seva program was also quite active this month, with four new donors and 10 pledges. The desire to participate in this program was enhanced greatly by H.H Sivarama Swami’s presentation during his Vyasa Puja celebration. During his talk, he highlighted the program’s importance and encouraged devotees to participate. By his side sat B.B Govinda Swami and although BB Govinda Swam’s disciples already sponsored two days, he joked how Sivarama Swami keeps urging him to sponsor yet one more day himself. As it stands now the top contribution is 4 days by one devotee and Sivarama Swami and two other donors are the only ones in that category.

Each month we want to highlight a unique story surrounding the contribution of at least one Nitya Seva donor. This month, our donor’s story is extremely special as he is one of our first, “friend of Krishna”, donors.

Mohana Prabhu, one of our Nitya Seva crew members, was trying to distribute books one day in Budapest and was experiencing great difficulty. He wrote to Sivarama Swami and asked for Maharaja’s prayers and the response was powerful. The next person Mohana Prabhu approached gave him a large donation but did not want to take a book. Mohan, however, was determined.  He found out that the man had a passion for the Beatles and so gave him the Krishna book with George Harrison’s introduction and took his phone number to stay in touch. Over the next two years the man continued giving occasional donations. Once, the man expressed how his wife was planning on leaving him and Mohana promised that he would pray for their marriage. Five months later, both the man and his wife came to visit Krishna-Valley.  They were awestruck by it. Eventually Mohana explained to them the Nitya Seva program and they decided to sponsor a whole day. They were grateful to Their Lordships, Radhe Syamasundara for saving their marriage and extremely inspired by Krishna-Valley and the philosophy behind it, so they were happy to become Nitya Seva sponsors.