Kartika began early at the beginning of the month of October this year, along with other bigger festivals being celebrated in Krishna Valley too.  On the eve of Saradiya Rasayatra it has become the local tradition after the evening program and darshan, that the Deities of small Radha-Syama stay in the temple room during the night until the next dawn.  The doors are also locked so there is no disturbance during Their nightly pastimes.  On the day of Radha-kunda prakat we worship Them in the shrine set in the middle of the beautifully decorated Radha-kunda, remembering the appearance of Srimati Radharani’s favorite, sacred lake and offering our lamps in its honour.

Early preparations began for Govardhana-puja two weeks before the festival itself:  devotees were making their foodstuffs for Giriraj continuously, which are offered on the day of the festival together with those also made by other Hungarian temples and Nama-hattas. This year we offered more than two tons of sweetmeats and savouries for the pleasure of Govardhana, Who accepted the offerings with a beaming smile sitting on the top of His huge cake in front of the altar.

Dipavali is generally celebrated a few days later, as local devotees are busy with the Govardhana-puja preparations.  On the day of Divali the local children dress up as the monkey soldiers of Lord Rama and visit the houses of Krishna Valley to collect the different preparations the devotees cook in honour of welcoming back Sri Rama after His long exile.  In the evening the Deities of Lord Rama, Sita Devi, Laksman and Hanuman travel around in an ox-cart along the beautifully lit streets of New Vraja-dhama visiting the homes of a few devotees to accept the many delicious offerings given by all.

On Gopastami day we remembered the pastime when Srimati Radharani exchanged Her clothes with Krishna’s intimate gopa-friend, Subala Sakha, with the intention of escaping from Javat to join Her beloved Syamasundara. That day Srimati Radharani mesmerized the devotees with Her darshan wearing a dhoti, along with a gopa-turban and a flute tucked in Her belt. 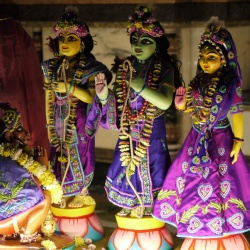 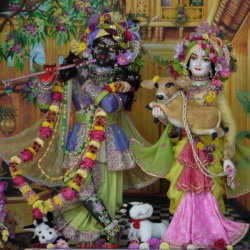 Thanks to the Nitya-seva programs at Budapest and throughout Hungary, there are more and more devotees starting Nitya-seva sponsoring, either on their own, together, or with other devotees.  It is very nice to see that the devotees take so seriously the responsibility of maintaining the worship of Radha-Syama, Gaura-Nitai and the other Deities of Hungary.  And we would like to say a very special thanks to all of you who come forward from different countries to participate in this same mission!  With your generous Nitya-seva contributions you express your love of our beautiful Deities, Who are not just the Lords of the Hungarian devotees but They are truly Tribuvana Sundara:  enchanting everyone not only in other locations, but in all the three worlds.

On the Govardhana-puja festival besides the food offerings we also received many Nitya-seva donations too. Two full Nitya-seva payments were started that day, one of which was the second Nitya-seva contribution from the same devotee family this year. Two other devotees finished their full payments at the occasion of the festival, so we have reached 42 fully sponsored days for the pleasure of Radha-Syama and Gaura-Nitai!  Thank you so much for your kind donations of support!