This year the festival dates were all very early in the Vaisnava calendar, so our celebrations continued throughout the whole of August! First the appearance day of Lord Balarama:  we visited the holy places connected to His pastimes, listened to Balarama-katha (which was accompanied by the children’s spontaneous plays on the same pastimes) and we cooked for Him on outside ground dug stoves.

A few days later we gathered to celebrate the appearance day of Syamasundara, and on this occasion many other devotees joined the residents of Krishna Valley from other Hungarian centres, and from abroad. This year’s Janmastami was the 21st anniversary of the installation of Radha-Syamasundara, so please don’t forget that by Their 25th anniversary, we would like to cover all the days of the year with Nitya-seva contributions! This Janmastami the midnight darshan was possibly even more beautiful than the morning dashan: Radha-Syama – for the first time - were dressed into an outfit that glowed!  Many of you offered bigger donations to Syamasundara for His "birthday” on behalf of Their Nitya-seva, thank you all so much!  It was a great pleasure to do service that day at the Nitya-seva table! 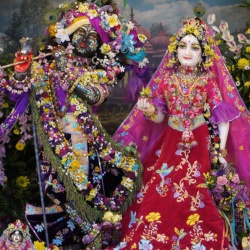 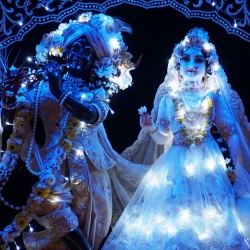 And as we know from Srila Prabhupada:  the celebration of Janmastami indicates that the Radhastami festival is coming soon! Srila Prabhupada explains in the 10th canto, 5th chapter of the Srimad Bhagavatam, in the purport of the 18th verse:  "Therefore, Krisna’s appearance in the land of Vraja indicated that the chief goddess of fortune, Radharani, would also appear there very soon.” On Janmastami it seemed that the beauty of Radha-Syamasundara could not be outshone, but it indeed happened on the appearance day of Srimati Radharani.  Radha-Syama received another painted outfit, which was made by Kathamrita mataji. She had been working on it for a year and a half, with great devotion. This recent "fruit outfit” also turned out to be a masterpiece, because enhanced by Her golden complexion, Radharani's beauty radiated even more!  Evening kirtanas and bhajanas exceeded the previous festivals in both time and sweetness.  And we even got more Nitya-seva donations on Radhastami festival!  But we shouldn’t be surprised, because Srimati Radharani is the Queen of New Vraja Dhama! 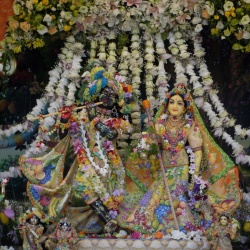 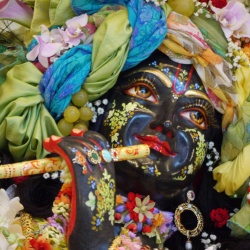 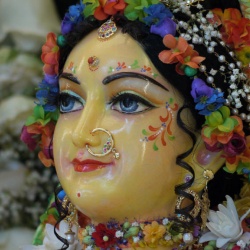 One of the special guests of the festivals was Srutirupa Mataji, one of Srila Prabhupada’s disciples. This was her first visit to Hungary, and she told us of pastimes with Srila Prabhupada, in connection with cooking and honoring prasadam.  She was so enchanted by the beauty of Radha-Syamasundara and Dayal-Nitai Vijaya-Gauranga and by the devotion of Their servants, that she also started to sponsor a Nitya-seva for Their pleasure!  And so that you can also meditate on the plans of the next four years, here we have a summary of what we have achieved so far with the Nitya-seva project!

To date, we have received 33 full (4,7 million HUF) Nitya-seva payments, and many of the donors are already making plans and bookings for their second Nitya-seva day.  Besides these, there are 40 devotees or groups of devotees who started to sponsor a full Nitya-seva.  It means we have 73 days either fully sponsored, or not so far from being fully sponsored. This is great for now, but we still have long way to go!  Expressed in numbers: you must know from the Nitya-seva brochure that the total investment target is 1.725.000.000 HUF.  So presently we could invest 485.000.000 HUF, which lakshmi includes the Nitya-seva donations paid in during the previous system, and a certain amount of the Hungarian taxpayers tax deductible donations too. Thank you so much for your contributions so far, and let’s continue to work together for our common goal: ensuring the future worship of our beloved Deities!

Contrary to August, the month of September is pretty empty in the Nitya-seva calendar.  It is easier to enumerate those days which are already booked: 2nd, 4th, 5th, 10th, 12th, 17th, 25th, 30th. Besides these dates all other days are ready available!

In the name of the Nitya-seva team your servant,