We held Krishna Valley’s Bucsu festival on the third weekend of July as usual. During those three days Radha-Syama had almost 7000 guests! This festival always depends on the great cooperation from members of the Hungarian yatra.  It takes a huge effort to organise all the features of Krishna consciousness for so many people, to feed them prasadam and make them feel happy and satisfied. It was a great joy to serve together with all those devotees who participated in this great preaching opportunity! 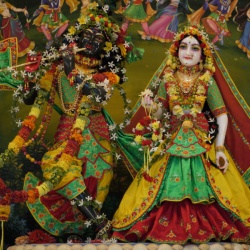 Small Radha-Syamasundara have started to attend Nitya-seva programs again!  Last time They got an invitation from Budapest where Tulasi Krishna devi dasi organized a program, as she does each year. The devotees received Them with great love and devotion and besides the nice bhajanas, they even arranged a drama and dance for the pleasure of the Divine Couple. Asta Sakhi mataji and Mohan prabhu spoke about how practising devotees can also participate in the pastimes of Radha-Syama and Gaura-Nitai, which are taking place even at the present time.

Small Radha-Syama eagerly await the devotees’ invitations!  Those devotees who pay Nitya-sevas in groups, members of councillor groups, bhakti vriksa groups, invite Them into Their homes eager to learn why it is one of the best ways to take part in the above mentioned pastimes, by participating in Their Nitya-seva project!

In the month of July we received a new full Nitya-seva payment, and a kind devotee living near Budapest started to pay a full amount by installments, also two newly formed groups are paying full amounts each during the next four years.

And here in Krishna Valley a great competition started among local children:  who will be the first to collect a Nitya-seva for the pleasure of Radha-Syama!  They are so enthusiastic to participate in this pastime!  We’ve written about the young Jiva before, who started to raise funds by approaching the guests who attend the local festivals. Now small Syama has also joined the group of fund raisers, however he is applying a different technique: picking the ripening plums from his tree in the family garden, he then sold them to guests visiting the temple and he donated this income for Nitya-seva!  He’s still thinking about what to do when it’s not fruit season, but because of his sincere desire, Radha-Syama will surely show the best way he can  complete the rest of his Nitya-seva amount.  As the saying goes: Where there is a will, there is a way!

This year we’re celebrating both Janmastami and Radhastami in August, and we would like to invite all of you to celebrate together the appearance of Sri Syamasundara, Srila Prabhupada and Srimati Radharani!

PS: As we have promised in the previous newsletter, you can read the answers of the Bhakta Sanga gathering’s questionnaire here.  We tried to give a small insight into all the aspects of the worship of the Deities, since so many activities are involved in the daily worship: growing vegetables and flowers, taking care of the cows and the Deities’s personal servants (the pujaris) - being part of the Nitya-seva project too. You can read the detailed information about these in our Nitya-seva brochure also.